The “Let’s Eliminate Nuclear Weapons” webinar, hosted by URI North America on March 25, was a monumental moment for United Religions Initiative as we seek to more deeply engage the issue of nuclear abolition. Thank you to all who were a part of it! 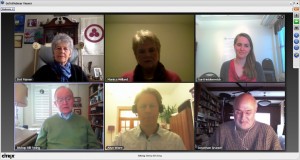 At the height of the seminar, there were 46 attendees who listened to presentations from and engaged in a question and answer session with Bishop Bill Swing, Jonathan Granoff, Alyn Ware, and Dr. Dot Maver. The majority of attendees joined from North America and Europe.

If you were on the call, would you take a minute to let us know about your experience?

Because we want this seminar to have long-lasting affects for the URI family, we are offering these resources to guide you as you take action in the movement to eliminate nuclear weapons. You can listen to the call using the link below or read a short summary of it after this list.

This call was also a pre-Parliament event to promote the Parliament of the World’s Religions coming to Salt Lake City in October 2015. Registration rates will increase after March 31, 2015, so sign up today. If you are interested in participating in a group rate, email at ardeyt@sbcglobal.net.

Following an opening prayer by Bishop Swing, Jonathan Granoff, President of the Global Security Institute and member of the Voices for a World Free of Nuclear Weapons Cooperation Circle, gave a brief history of the United Nations Nuclear Non-Proliferation Treaty that is set to be reviewed in April 2015.

“We can do something,” he said of each person’s ability to help eliminate nuclear weapons. (You can find out how by opening the Resource and Action Packet.) Bill Swing followed with a call for anyone who “loves God and loves life” to do something. The issue of eliminating nuclear weapons is a moral imperative, he said, sharing the story of Tomoko Wantanabe and the ANT-Hiroshima Cooperation Circle.

Dot Maver, Founding Trustee of The National Peace Academy, a URI North America Affiliate, explained that global society is beginning to live a new story of cooperation and interconnections.

“It is time to eliminate nuclear weapons because they are not part of our New Story,” she said.  (You can read her full prepared remarks here.)

Following the presentation, URI Representative to the United Nations Monica Willard read the poem 20,00,000 by Justine Merritt. This was followed by a rich time of questions and answers that continued for 30 minutes after the call’s scheduled conclusion.