2015 marks the 50th anniversary of Unity-and-Diversity World Council (UDC), which has been a pillar of the interfaith movement in the Los Angeles area since 1965! We want to thank founder Leland Steward, and all the members of UDC over the years for their contribution to building a more peaceful world.

It has been a delight to train as an Interfaith Minister under the special guidance and wisdom of Leland Stewart.

For a number of years the Cooperation Circle Unity-and-Diversity World Council, through the Unity-and-Diversity Ministry,  has been training and ordaining ministers based on a study of all religions and many spiritual groups, the relation of science and religion, and the practical aspects of the ministry. 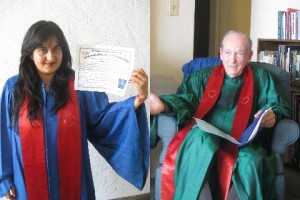 The purpose of the training for a Unity-and-Diversity Ministry is to prepare men and women who have felt a calling for to an interfaith kind of ministry which that draws on all religions and spiritual movements and is open to people of all faiths or no specific faith. The ministry also contains a commitment to social, environmental, and humanitarian concerns.

I am immensely proud that the UDC is a cooperation circle and a real asset to the URI family. The ministry study is very valuable and is open to those who follow a particular faith, to those who are scientifically oriented, and to humanists, agnostics, and atheists, so long as they have an interest in exploring other paths besides their own.

The training studies cover the main historic religions, some more recent religions, and a number of spiritual movements. It also studies the relationship between science and religion. Considerable time is spent on the practical aspects of the ministry such as leading services, counseling, and conducting various ceremonies, such as marriages, funerals, and dedications. It is a very thoughtful, reflective and deep learning process.

Kiran: Why do we need an interfaith ministry?
Leland: First of all, we need to learn about the many religions of the world, and in time there need to be interfaith centers throughout the world where people can come to meet people of different faiths. It is helpful to have people who have learned about the different religions and are able to be supportive of them all, rather than taking sides with one religion as opposed to the others.

Kiran: What has been the impact of the training so far?
Leland: We have trained and ordained over thirty people up to this point, and in the last few years we have started a weekly interfaith service on Sunday morning. We now have several of our ordained interfaith ministers taking part in those Sunday gatherings. As a result, this effort is more stable because it involves a number of people in the planning and carrying out of the services.

Kiran: After the completion of the training, what are the next steps?
Leland: Some of our ministers move out of the area and do not follow up on their ministry. Our job is to encourage them to continue in the work wherever they are located. We now have our weekly interfaith services as a way of offering a path of continuation to those who are interested. We now have a Unity-and-Diversity Ministers Association, which meets quarterly and is updating the ministry curriculum and beginning to get involved in the training. We also have a UDC School for Interfaith Ministry, which is making more of a group effort of the training. UDC has a number of activities now, through which our ministers can become involved.

Kiran: Where do you see the further development of the interfaith ministry in five years time?
Leland: Every community needs to have what we call a Unity-and-Diversity Center, called by whatever name, where people of many different faiths can come together and get to know each other, as well as to worship together. Religious centers based upon one religion are not in a position to provide that kind of place, so interfaith ministers are the ones who are in the best position to provide that kind of a center.

Kiran: The UDC is a cooperation circle within URI. What difference has this made to our work?
Leland: URI has made some outstanding progress since its founding in 1995. Some of us have been following that progress with admiration. However, not enough of our members and friends are aware of URI’s development.

UDC is much smaller than URI, but it has also has a unique work to do in the world. We see our relation to URI more as two networks that need to cooperate with each other. We have learned a great deal from URI’s work and hope it has been reciprocal. We joined the cooperation circle process to show our support of URI, and we have been trying to help URI to cooperate with our network through Peace Sunday, the ministry, and in other ways. Over time we hope to network with URI’s worldwide activity, with which those of us who know about it are greatly impressed.

Kiran: What events does UDC have coming up in 2015?
Leland: Our most major event is Peace Sunday, which is annual, and we now seem to be settled in on being part of the International Day of Peace in September.

We also have an annual Interfaith Celebration of Light, which occurs during the Holy Day Season in December. The goal of that event is to bring the faiths of the world together to celebrate their common ground and prepare for the New Year as giving increasing prominence to the emerging global civilization.

In addition, we plan a second year of a monthly Culture of Peace Series, the content of which is yet to be determined. We will be publishing a book to document the first Culture of Peace Series.
One more program that is continuing is our weekly Gatherings of Creative Community on Sunday mornings. This is particularly related to the interfaith ministry and is led by three of our Interfaith ministers.